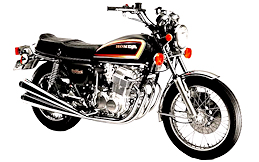 1969 was a pivotal year in motorcycling.  Honda launched their landmark CB750.  For the first time you didn't need to be a mechanic to own a motorcycle.  Smooth, reliable, AND it didn't leak all over your driveway.... yes!

The inline 4-cylinder engine was a marvel.  Chain operated overhead cam, 4 individual exhausts and a disk brake up front.  Honda drew riders to the machine like bees to honey.  Not only incredibly popular on the street, the CB750 appeared on race tracks as the CR750, and in the drag racing world, Russ Collins shoe-horned two of those engines into a single frame - and soon replaced that with his infamous 3,300cc 12-cylinder triple engined monster of a drag bike - the "Atchison, Topeka & Santa Fe".

As the 1970's progressed, Honda improved and restyled the CB750 with a slightly higher performance engine and a 4-1 pipe to create the Supersport version.  Honda broke additional new ground with an automatic version of this masterpiece.....

In the 70's choppers and cafe racers weere often based on the CB750, so it is not unusual to find some heavily modified versions out on the road today.

Randakk’s is one of the web’s best sources for performance parts and components to restore and transform vintage Honda SOHC Fours - not just parts for the CB750, but also for the smaller inline fours - the CB350, CB400, CB500 and CB550 bikes.. We proudly stock vintage Honda engine and carburetor parts, suspension and brake components, electrical parts, filters, grips and various performance and reproduction Honda parts.

Every vintage Honda part you see on Randakk’s is in-stock in our warehouse. Your order will normally ship out within 24 hours of completion. We ship to any of the 50 states and more than 50 countries. Our mission is preserving and improving classic Hondas. When you begin your vintage SOHC inline four restoration, look to Randakk’s for your OEM-style and reproduction Honda parts. Mile after mile, we’re in it for the long haul.