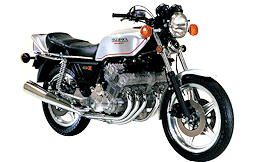 It was an anomaly. It was outlandish. It was an engine with a motorcycle attached, and it was the fastest production bike of its day. The Honda CBX was the culmination of a vision its designers had in a fever dream, and it set a standard for out-and-out power that manufacturers are still chasing, well into the 21st century.

When the minds at Honda decided to seek renewed relevance in the performance sports bike niche, then Director of Research and Development Tadashi Kume tapped Shoichiro Irimajiri for the job. Irimajiri had developed Honda’s five- and six-cylinder racing engines in the 1960s, and had also overseen the development of the six-pot M1 concept bike, on which the original Gold Wing had been based. Young and unencumbered by doubts, Irimajiri was no stranger to audacity.

After only two years of development, the CBX was ready for release for the 1978 model year. At first glance, all that is visible is that over-the-top engine. Since it acts as a stressed member to the tubular-spine frame, the engine seems to hang from beneath the motorcycle. Irimajiri chose to pitch the engine forward 30 degrees for better distribution of its 600-pound weight, and the only thing that runs beneath it are the 6-into-2 exhaust pipes.

Ostensibly a 1000cc liter bike, the CBX actually displaces 1047cc’s. It made a commanding 105 horsepower at 9000 RPM and 52 foot-pounds of torque at only 6500 RPM when introduced in 1978, though horsepower fell in later models. In an effort to increase cornering clearance, engine width was slimmed by stacking engine components — placing alternator and ignition components aft of the engine. Honda utilized a tubular steel frame, small-diameter forks and twin-shocks for suspension, and other understated design elements for the chassis. Other than the engine, the CBX was conventional. But, what an engine.

Honda would detune the CBX for 1980, partially in response to the West German horsepower limit of 100, and partially to fit a more sport-touring role for the new, faired CBX-B. Around the same time, the other Big Four manufacturers were coaxing enough power out of their superbikes to equal and surpass the CBX. Another couple of years and the CBX was left to history.

The six-cylinder superbike Honda created in the CBX achieved cult-like status over the next couple of decades. It is now a rarity, but an excellent option for a complete Honda restoration project, if you can find one.

Everything on Randakk’s website is in-stock in our warehouse. Your order will typically ship within 24 hours of completion, and we ship to any state and more than 50 countries. Our mission is to help preserve and improve classic Hondas. When you begin your vintage CBX restoration, look to Randakk’s for your OEM-style and reproduction Honda parts. Randakk’s is here to provide the maintenance parts your Honda needs. Mile after mile, we’re in it for the long haul.