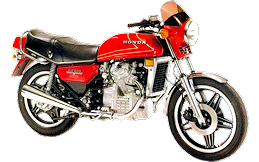 Whoever said, ‘Looks aren’t everything,’ clearly wasn’t a motorcyclist. With the parity in modern motorcycle performance, bikes are bought and sold, and live or die, based largely on looks alone. There are exceptions at the outer limits of performance, where looks play second fiddle to raw power and speed, but in general a motorcycle will sit idle on showroom floors for years if it doesn’t fit one mold or another.

In 1978, Honda unveiled its most audacious motorcycle to date, the transverse V-twin CX500. It was one of the first motorcycles on the market with liquid cooling and tubeless tires, both of which became nearly ubiquitous in the coming years. But Honda would make a slew of compromises to mount its engine — originally intended for small cars — in its frame. The 80-degree angle of the V required extra balancing, but was necessary to keep the bike thin. The twisted heads made room for the carbs, an OHV design with pushrods was required to make room for the rider’s knees, and to access many wear items (gearbox, cam chain, etc.), the engine had to be removed from the frame.

The CX500 was tall up front and squat between the wheels. Its absurdly oversquare engine had an astronomical rev ceiling for its day, but it still only made 50 horsepower at the crank at 9000 RPM, topped out at 112 mph and ran a 14-second quarter mile. Honda tried to sell it as a sport bike, but sitting in showrooms right next to the also-new CBX, CX500s found few takers. U.S. sales were weak, and the model line lasted only five years.

Honda would tweak the CX over that time, though, and several distinct iterations of the bike made a better impression. The CX500C and CX500GL seemed to work better aesthetically, set up as they were as cruisers. A bagger touring version, the CX500I, saw some action on interstate highways. And the CX500TC Turbo made great use of that high RPM ceiling. But sales did not warrant continuing the line, and in 1983 the CX ceased to exist.

The CX500 has made a resurgence in recent years, though. As more and more builders look to unique models for custom builds, the CX500 has found a niche. Once stripped, its frame’s unusual looks become quite appealing, and its V-twin engine evokes Moto Guzzi cool without Euro-bike prices. The CX500 is like that one girl no one wanted to bring to prom, but when she shows up at the reunion, jaws drop. In the right hands, and with the right vision, the CX500 can be made into anything its owner desires, within reason.

Every vintage Honda part you see on Randakk’s is in-stock in our warehouse. Your order will normally ship out within 24 hours of completion. We ship to any of the 50 states and more than 50 countries. Our mission is preserving and improving classic Hondas. When you begin your vintage CX500 restoration, look to Randakk’s for your OEM-style and reproduction Honda parts. Mile after mile, we’re in it for the long haul.