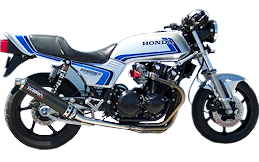 Through a modern lens, it is hard to grasp how truly revolutionary the four-valve, DOHC-4 CB750F was when Honda unleashed it in 1979. While other manufacturers had toyed with the dual-overhead cam concept in a transverse four prior to the now-classic CB, Honda perfected it. This one motorcycle heralded an age of performance innovations that birthed an entire class (pure sport) of modern motorcycles.

In the late 1970s, no one thought a four-cylinder engine could ever compete with bikes like Ducati’s 900SS on the track on in drag-peg canyon twisties. The Duck was made to bank, and its L-twin 67-horsepower engine was so centrally situated that no four-pot could, or would, ever compete with it. In 1979, Honda made everyone eat crow.

The CB750F was not only the equal of the 900SS, it surpassed on-track and in the really real world of the streets. Its chassis was superbly stiff, and its three disc brakes could halt it even at hyper speed. It steered lightly, and its power (75 horses) was on par with the 1000cc bikes the other Japanese manufacturers were turning out. The perfectly square engine (62mm stroke and bore) produced a beautiful marriage between engine width and surface area for its four valves.

The F designation was first placed on the SOHC CB750 in 1975, signifying sport-inspired styling and lighter engine components like the flywheel and crankshaft. With the DOHC, the sport bike was truly born. So complete was its dominance from the time it was introduced, that the DOHC in-line transverse four-cylinder engine still dominates the sport category well into the 21st century.

Honda utilized the DOHC-4 in the CB750K and the CB900F, both of which hit dealer floors in 1979 as well. The K series 750 was a more docile version of the CB750F, without the Super Sport version’s flair for dramatics, but the CB900F was a beast — as in 95 horsepower at the crank and 57 foot pounds of torque, that kind of beast. It sold well, but the CB900F lacked the handling prowess of its little sister. In 1983, though, Honda summoned a demon.

The 110-horsepower CB1100F was a cruise missile. Rarely does the word flickable get used in reference to a better-than-liter-sized bike, but motorcycle journalists of the time used exactly that word to describe the CB1100F, which steered like a bike of half its displacement. Honda achieved this minor miracle by placing the DOHC-4 1100 engine in the previous CB900F frame. It handled magnificently in its new skin, but not perfectly. Care had to be exercised in cornering to keep the tires hooked up with the tarmac, but on exit the CB1100F was in its element. During more subdued riding, its prodigious but flat torque curve meant the rider had no need to fiddle with the shift lever. The 1100F was rideable in almost any gear, at almost any (legal) speed.

The DOHC-4 Hondas were ahead of their time and at the head of the class. The lap times and quarter-mile numbers they produced would be respectable today, but they were ridiculous in their era. Honda had set a bar with these machines that would move only incrementally over the next three-plus decades.

Every Honda part that you see on Randakk’s is in-stock in our warehouse. Normally, orders ship within 24 hours of completion, and we ship to any of the 50 states and more than 50 countries. Our mission is simple: to help preserve and improve classic Hondas. When you begin your vintage Honda DOHC-4 restoration, Randakk’s has your OEM-style and reproduction Honda parts. Randakk’s is here to provide the maintenance parts your Honda needs. Mile after mile, we’re in it for the long haul.