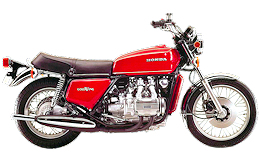 Following hot on the heels of the success of its venerable CB750, the minds at Honda decided to see just how far toward the extreme they could push motorcycle engine performance. Honda chose Shoichiro Irimajiri, designer of previous Honda Grand Prix racing engines, to head the development of its new machine. After three years of experimentation, including design and manufacture of the then-insane M1 prototype (in-line six cylinder, 1470cc), the first GL1000 hit dealership floors in 1975.

The GL1000’s liquid-cooled, horizontally-opposed, four-cylinder engine was inherently smooth, and lent itself to a maintenance-free shaft final drive. Honda made every effort to lower the center of mass to provide straight-line stability, going so far as to place the fuel tank below the seat. The faux fuel tank then became a storage box, which also housed the radiator expansion tank and spare kickstarter. Its 580-pound weight required three disc brakes to halt, a motorcycling first that is now ubiquitous. The Gold Wing’s four 32mm Keihin carbs helped its engine produce a then-phenomenal 78 horsepower at 7000 RPM and 61 lb/ft of torque at 5500 RPM.

The GL1000 struggled to find a market in its earliest days. Having been engineered ostensibly for the touring niche, which in 1975 was a much smaller segment than it is today, the Gold Wing suffered from a lack of fairings and luggage options. Its performance numbers inspired awe, but it lacked the maneuverability and riding position of a sport machine. Despite a lack of stellar sales numbers (just 10 percent of expected unit sales), Honda continued production.

1976 saw only slight changes to the GL1000, though the aftermarket was beginning to provide dress options for the Gold Wing that Honda had not. However, the 1977 model-year bike received touring-centered changes (higher bars, neoprene grips, tapered roller steering bearings, etc.) that made it more suitable for a burgeoning long-distance market. Honda added some beefier engine covers and lined the fuel tank for rust prevention, showing a willingness to listen to owners’ gripes.

The biggest changes the Gold Wing line would see in the 70s happened in 1977, when Honda made a variety of engine mods aimed at improving roll-on torque (at the expense of top-end horsepower). Carbs were shrunk and valve timing shortened, while spark advance increased. The resulting boost in low-end grunt did little to improve handling of the Gold Wing, which still preferred to maintain a straight line. Touring improvements like the king-and-queen stepped saddle, two-stage damping forks, Comstar mag wheels and chromed exhaust did reduce the maintenance regimen and leave more time for open-road touring, however.

By 1979, the once-revolutionary Gold Wing was becoming old hat. Other large-displacement motorcycles, some of which could run right past the GL1000, had fragmented the market place and rendered the Gold Wing moot. Honda made a few more tweaks for the 1979 model (updated tail light, black clutch and brake levers, etc.), but substantial changes would be reserved for the upcoming 1980 GL1100. The original Gold Wing had seen its day, and along the way had single-handedly created a niche market in long-haul touring that today commands the best efforts of manufacturers. It was quirky, sure. But it was the first of its kind, and the original Gold Wings still inspire awe in those who remember how truly revolutionary it once was.

Randakk’s provides one of the web’s most comprehensive sources for vintage Gold Wing performance parts and components, as well as those of other vintage Honda motorcycles. We proudly stock vintage Honda engine and carburetor parts, suspension and brake components, electrical parts, filters, grips and various performance and reproduction Honda parts.

Everything you see listed on Randakk’s is in stock in our warehouse, and orders typically ship within 24 hours of completion. We will gladly ship to any state and more than 50 countries. Our mission is to help preserve and improve vintage Gold Wings and other classic Hondas. When you begin your vintage Honda restoration, look to Randakk’s for your OEM-style and reproduction Honda parts. Once you’re done, Randakk’s is here to provide the Gold Wing maintenance parts your Honda needs. Randakk’s is your source for Honda touring bikes. Mile after mile, we’re in it for the long haul.