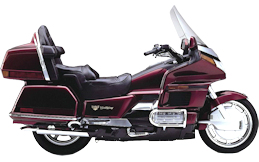 When the GL1200 hit dealership floors, rumors were already floating that Honda was hard at work on a complete redesign. The GL1200 had made headway against its growing competition, but it was little more than a bigger GL1100. To maintain market share, Honda would need to do something drastic. Its drastic action came in 1988, in the form of the all-new GL1500.

Honda broke out the original M1 Gold Wing prototype when developing the GL1500 to compare the performance of its flat-four engine to that of a six-cylinder. Big Red settled on the six-pot, but altered its configuration. Staying true to the engine design that had evolved with the GL series, Honda outfitted the new Gold Wing with a horizontally-opposed, flat-six boxer engine. With its new power plant, the GL1500 improved to 100 peak horsepower at 5200 RPM, and 111 pound-feet of torque at just 4000 RPM. The Gold Wing engine set the bar for smooth, useable power, and the rest of the Big Four would be playing catch-up for years to come.

The GL1500 utilized just two Keihin 36mm CV carburetors, eliminating the one-per-pot carb bank that had always been a Gold Wing feature. Weight was a bloated 798 pounds, but optimized wheel base and weight distribution made the bike handle much lighter than that.

Honda made every effort to equip the new Wings with every amenity a weary traveler might want. An electric reverse gear, linked to the electric starter, appeared for the first time on the 1988 models, and the trunk and panniers featured single-key locking and unlocking. The air-assisted shocks now utilized an onboard air compressor across all models, and electric cruise control was standard. The stock GL1500 windscreen was three-position adjustable and bodywork was seamless, encompassing the bike without a single bolt being visible. The GL1500 looked finished and fresh.

All models included the AM/FM cassette player, but the 1990 model year saw the Special Edition (GL1500 SE) get extra upgrades, including an improved stereo. The top-of-the-line model also got an extra bank of rearward lights and a trunk spoiler, a vented windshield, heated adjustable foot boards, additional lights and an intercom system.

From its introduction in 1988, until its replacement in 2001, the Gold Wing line experienced modifications but no significant changes. The Aspencade was downgraded momentarily with a cheaper stereo and no reverse gear. Its price and weight dropped, but Honda would improve the stereo again the following year. Various anniversary models celebrated the 20th year of Gold Wing production, but otherwise the GL1500 line was stable. Honda had put much into its design of the King of Motorcycles, and found no need to mess with success. If it ain’t broke, don’t fix it. Right?

The parts you see listed on Randakk’s website is in stock in our warehouse, and orders normally ship within 24 hours of completion. We ship to all 50 states and more than 50 countries. Our mission is to preserve and improve vintage Gold Wings and other classic Hondas. When beginning a vintage Honda restoration, look to Randakk’s for OEM-style, reproduction Honda parts. When your restoration is finished, Randakk’s is here to provide the Gold Wing maintenance parts you need. Randakk’s is your parts source for Honda touring bikes. Mile after mile, we’re in it for the long haul.