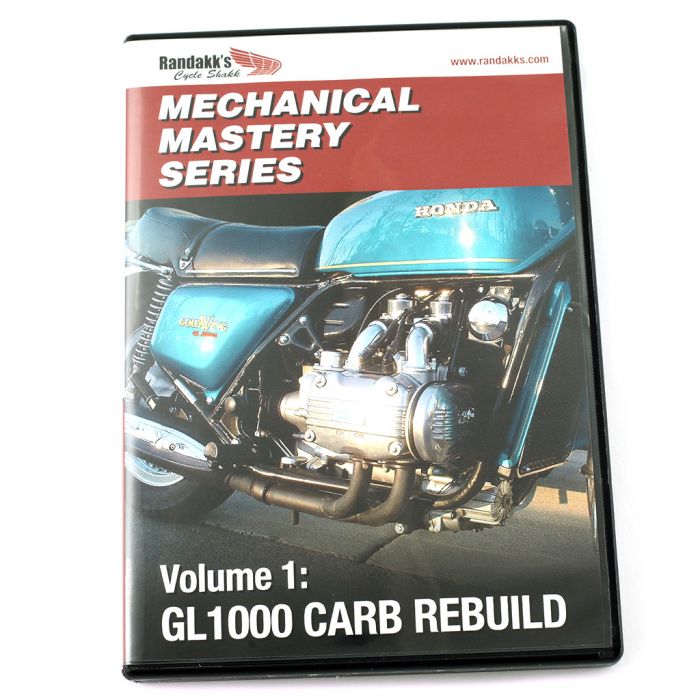 Included in the video is 3 hrs, 16 minutes of content! This is the best 3 + hours of video production since Spartacus...another great epic!

View 30 Second Trailer...be sure your speakers are turned on!

Video augments the extensive technical information provided on this website and equips any GL1000 owner with reasonable mechanical aptitude with the knowledge to perform a successful overhaul of these carbs.

Learn by watching Randakk's perform an actual carb overhaul from start to finish using the specialized techniques and tips. The video goes into much greater detail than possible in the Tech Tips section of this website.

Although this video is specifically targeted at the GL1000, it would be beneficial for anyone undertaking a carb rebuild on a multi-carbureted motorcycle of similar vintage.

Demonstrated are easy to duplicate "old school" methods using the simplest tools and methods available for excellent results by nonprofessional mechanics. In the video,a rather hopeless set of carbs (abandoned after 2 prior overhaul attempts by unnamed parties) is brought back to perfection. The carbs rebuilt in the video end up (permanently) on Randakk's show bike Marilyn!

No sophisticated methods used. Everything shown can be easily duplicated in a typical residential garage. The main requirements are time, patience and attention to detail.

Armed with this video and access to this website, anyone with average mechanical skills can accomplish a successful overhaul.

"Randall: Your DVD is absolutely brilliant! First let me say one thing: I've made my living in the movie business since 1983, working as a Production Designer, doing feature films, TV Show productions and quite often involved in doing commercials on which we spend multi-hundreds-of-thousands-of-dollars for a 30 seconds production! So I'm not easy to impress.-) ...and I ain't gonna give you points for artistic performance .-) Besides that (and it is besides the point)....what can I say; Absolutely brilliant! All one could ever want to know about GL1000 carbs, all one could ever want to know about the overhaul procedure, thoroughly explained step by step, in an easy to understand manner. It was a pleasure watching the video, and congratulations for succeeding in what you set out to do!"

"Hi, Randall! I received the DVD and spent several hours reviewing it. I feel that you and your filming crew have done an excellent job -- much easier and much more thorough than the Honda GL 1000 Service Manual, Haynes manual, and Clymer's manual combined. It is so easy to understand that even a child could learn from it!"

"Randall -- Wow. Nice! The part where you remove the carbs from the bike is like watching myself back in the 70s and 80s when I did probably thousands of these, to the point of loosening the right side manifolds even! You might be telling too many secrets however!"

Bonus: Reveal of one proprietary tuning secrets in Chapter 13!

Details: Video is available in DVD format only. You will need a DVD player capable of playing dual density DVD's - 4 hours of play time on one side of a DVD. For best results, you should play on a home DVD playback unit connected to a large screen so you can see and appreciate the details presented. Also, be aware that computer-based DVD players and laptops are notoriously fickle and have a higher percentage of playback difficulties.

This DVD is an NTSC standard all region disc. This means there is no restricting region code preventing international DVD players from playing the disc. The disc is in NTSC standard format (frame rate, resolution), so users in PAL standard countries not intending to play the disc on a computer DVD-ROM drive will need specific hardware to play the disc. Such buyers will need to use a dual standard DVD player capable of playing both PAL and NTSC discs (many players sold in PAL countries have this capability). To display the NTSC signal they will need access to one of three different options: A NTSC television, a PAL television with a NTSC to PAL converter, or a dual format television.